Seraph of the End

In 2012, the world allegedly comes to an end at the hands of a human-made virus, ravaging the global populace and leaving only children untouched. It is at this time that vampires emerge from the recesses of the earth, likely followed by age-old horrors of the dark thought only to be myth. The vampires sweep the earth and claim it in a single violent stroke, subjugating the remnants of humanity and leading them beneath the surface to safety. This “protection” comes at the price of donating blood to their captors. At the age of twelve, Yūichirō and his friend and fellow orphan Mikaela plotted to escape along with the children in Hyakuya Orphanage. However, this resulted in their deaths and Mikaela sacrifices himself in order for Yūichirō to escape and be saved by members of the Moon Demon Company, an extermination unit of the Japanese Imperial Demon Army. Four years later, Yūichirō dedicates his life to destroy vampires and seek revenge against them for murdering his “family”. 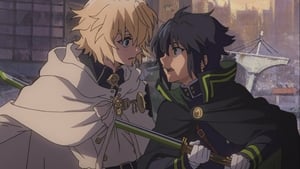